This demo is just here for posterity - it formed part of my August 2002 coding portfolio when I was first applying for jobs in the games industry. Be warned, there”s some seriously dodgy coding going on here…

This demo was my first released finished project. It combines stencil shadowing with an open source physics engine written by Russ Smith. 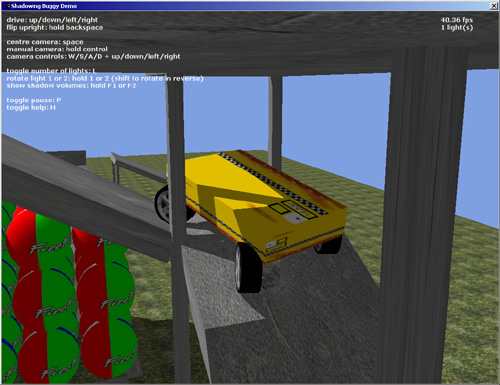 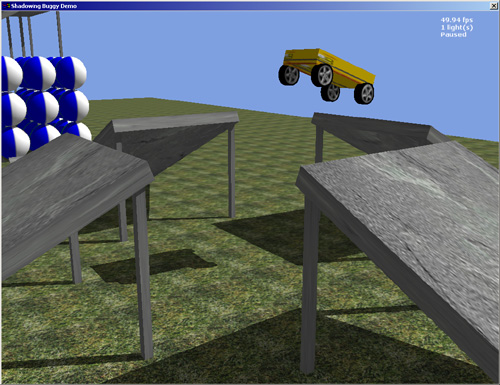 The screenshots show the only level of the demo, which contains a central stack of spheres waiting to be driven into and scattered, a raised platform with a thin ramp winding up to the top, and a set of jumps. The scene can be rendered with up to two light sources, the directions of which can be reassigned in real time.

For a decent framerate a card with native vertex shader support (e.g. GeForce3) is required, otherwise a CPU of 1 GHz should be sufficient.

The source code requires Visual Studio 7, the DirectX 8.1 SDK and ODE 0.03 or above to compile. The textures required for the demo aren”t included in the zip; download the binaries to get the textures.

ODE can be downloaded from Russ Smith’s site at http://www.q12.org/ode/. If you’re having problems compiling a compatible version of ODE, I’ve uploaded some compiled libraries of roughly version 0.03 that are known to function correctly with the demo. You can download those here:

I’d like to thank the following people and websites for contributions to this demo:

If you’ve warped this demo into something interesting then please let me know! :)